Reading My Way Through 2019

I'm a bit of a compulsive reader, and I have been since forever. I was that girl who spent nearly every penny of her (meager) allowance and (likewise meager) birthday money on books. And it was the seventies and eighties, so reading was most decidely not cool.

This year I'm returning to logging my books, because I was a total slacker last year. For the most part, I have absolutely no idea what I read. I'm also going to track my audiobooks, because I've developed a bit of an audiobook addiction, too. (You'll see!) So here we go!

Bring Me Back by B.A. Paris
Emma by Jane Austen

Jane Eyre by Charlotte Brönte
Behind the Beautiful Forevers by Katherine Boo
Making Habits, Breaking Habits (audio) by Jeremy Dean
Under Magnolia: A Southern Memoir by

Back in mid-July, I discovered the Popsugar 2015 Reading Challenge. I was intrigued by the variety it offered, so I decided to plunge in. For convenience, I decided that any book I had read that month or which I read for the rest of the year was eligible.

A lot of people complain that fifty-two books – one a week, on average – is too many. (There are fifty entries, but one entry is "a trilogy," bringing the total to fifty-two.) But I routinely read over a hundred books in a year, so I figured I could do it. More than half a year, less than half my usual total.

A mystery or thriller
On What Grounds

A book with a one-word title

A book of short stories

A book a friend recommended
The Art of Fermentation

A book at the bottom of your to-read list

A book your mom loves

A book that scares you†
The Tommyknockers by Stephen King

A book more than 100 years old

A book with bad reviews
Twilight by Stefanie Meyers (10/2015)

A book from your childhood

A book set in high school
Harry Potter and the Prisoner of Azkaban by J.K. Rowling (11/2015)

A book that made you cry

A book that takes place in your hometown

A book that was originally written in a different language

A book set during Christmas
An Undead Christmas

A book written by an author with your same initials
Foundling (Monster Blood Tattoo #1) by D.M. Cornish (in progress)

A play
Hamlet by William Shakespeare

*I never, ever shirked a reading assignment in high school or college; in fact, I always went above and beyond. For this entry, I chose a book that I should have read in high school but didn't. Fortunately, it's starting to pop up on high school reading lists.

† I don't know if this one "scares" me, but it certainly gives me the creeps! 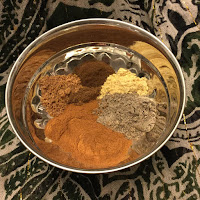 I've written before about my love of masala chai. I've been completely addicted for nearly fifteen years! For most of that time, I've been using basically the same recipe, the one I adapted from The New Guide to Spices.

But in November 2011, I had the privilege of visiting India with a nonprofit group. I had chai twice a day—more if someone in one of the villages made us some! And let me tell you, it puts the bagged stuff to shame; even my homemade masala chai was kind of sad by comparison!

I spent my first two days home trying to return to Eastern Daylight Time, but after that I began a quest. I was going to make masala chai that wouldn't put me to shame if served to my Indian friends! I read recipe after recipe, watched a few videos, and finally concluded that I was doing it all wrong.

In India, every family has its own way of making "masala tea". In many cases, they don't brew tea with spices and then add some milk at the end. I discovered my favorite Indian masala chai is made with a mixture of milk and water, with the tea added for the last few minutes. Traditionally, the ground spice blend is added to the liquid and heated until the milk begins to steam. THEN you add the tea, turn the heat to low, and allow it to steep.

In the end, I'm quite happy with my recipe. It's not perfect, and I certainly can't call it "authentic," but the taste really says "India." Plus, it sure makes my husband happy!

Light and heat cause spices to degrade in flavor and quality! Store tightly sealed in a dark, cool place.

Combine milk, water, and spices in a saucepan.
Heat on medium high until small bubbles form around the edges.
Turn the heat to low.
Add sugar and tea; stir well.
Cover and allow to steep for six minutes.
Strain and serve.


*A few notes on ingredients . . .
I use whole milk. Until my husband tried non-homogenized whole milk, he never liked milk. Now he does! Plus, I think the chai tastes much closer to what I had in India—creamier and richer.

As for the tea, masala chai needs something flavorful. My favorite is Taj Mahal from Brooke Bond, which was recommended to me by my interpreter and the grocery store owner in Kakinada, India. Some of my Indian friends from church prefer Lipton Yellow Label. I have some at home right now (the international supermarket and both Indian grocery stores near me were out!), and it's good, too. But even grocery store loose black tea (or a good bagged tea) is better than pre-bagged chai, or (heaven forbid!) chai from packaged concentrate.
Posted by Mirawyn on 7/10/2013 01:51:00 PM 1 comment: Links to this post

Mirawyn
Atlanta, Georgia, United States
Xandria Moonbrook was my first D&D character: a half-elven, lawful good, cleric/sorceress. Mirawyn is my current character, a half-elven, neutral good, sorceress/cleric. Maid Mirawyn is my Guild Wars primary, a mesmer. Me? I'm just this chick, you know? (Married Christian, far too many cats, no kids yet.)

Make with the Clicks!